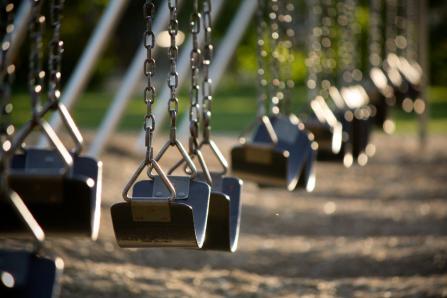 Said the man in a husky voice, dressed in a fitted trouser and a button down shirt with sleeves rolled to perfection, patiently waiting for his request to be fulfilled by the majesty that was now pouting in disagreement.

A stern hidden warning was enough for the tiny toddler to realize the topic was non negotiable and it was hard for the man to resist rolling his eyes at the way his 3 year old son vacate the swing, only after giving evil side glances to a tiny girl waiting for her turn. oh and with tears in her eyes.

Intertwining his hand with the tiny one he led them towards a bench located on the far end of the widespread park before realizing the astonishing fact that this 3 year old was developing a rebellious bone in his body.

He sat down on the bench before pulling his son closer in front of him and saw the way his lips were jutted outwards as a sign of disapproval. Like mom like son. Ruffling his wayward hair to perfection before adjusting the kid’s cloth, he then gave his undivided attention to the sulking kid.

He started..pausing in between to gauge the kid’s reaction, then added further.

“What does that made you buddy?”

There wasn’t a hint of anger in the question which made the kid realized the fact his dad was rather pointing at and after a moment of hesitation the child replied in a low voice.

This time the kid nodded his head in a clear NO without a moment’s hesitation and the man felt too proud to have nailed it so early without much fuss.

“No. I love her.she is my sister”, the kid replied in an innocent voice before twisting the grass beneath his shoes.

“Yes, you do. You are one awesome big brother. How’d you feel if some other guy made her cry like this?”

“I will feel bad”, the kid replied slowly before wiping his nose with the back of his hand at which the man removed the handkerchief from his pocket and cleaned the kid’s face.

The man ruffled the kid’s hair in praise and in turn received a proud priceless smile.

He asked this time fixing the collar of the kid’s shirt to which he vehemently shrugged in denial.

“Those who hurt others, what does that make them?”

“Bad. That makes them bad”

The man asked with amusing smile on his lips as the kid jumped up and replied with enthusiasm before raising his hand.

The man asked getting up and saw the kid had extended his hand as if he couldn’t wait now. Ruffling the hair before intertwining the fingers together they moved towards the swing area with an excited Aayush leading his dad.

Oh..the joys of parenthood. Arnav Singh Raizada couldn’t describe the priceless feeling he just experienced. Instilling the morals in his little one was like paving a way towards a better future. Nothing could top that proud feeling he felt surging in him as he saw Aayush went and apologized to the tiny girl. The girl embarrassed at the unexpected encounter flashed a toothless grin herself before shying away and leaving the swing voluntarily for his son.

Aayush looked at him in amusement for a nano second before getting on the swing happily.

A proud smug Raizada was sure his son has learned a precious lesson today.